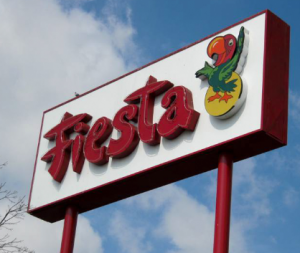 The other night I did an 8pm-12am voter registration shift at the Fiesta Mart on 38-1/2 and I-35. Considering that it was a rainy day in a non-presidential-election year, the turnout was good. While the noon-time and 4pm-8pm shifts seemed to be the busy ones, we got a good stream ourselves and beat our registration target. We registered our last voter at 11:52pm.

The other volunteer for the shift was Terry from DFT. I’m sorry I left the last meetup before the “Iraq for Sale” movie (it was my night to cook). Apparently the turnout was great and the movie got a lot of folks stirred up. Glen Maxey was there to move the anger into action at the end. After the continuous stream of bad news (Iraq, Katrina non-response, condoning torture, removing habeas corpus, NoKo nukes) I’ve been feeling burned out instead of motivated politically. I could have used the shot in the arm from the movie.

But I’m really glad I did the voter registration. The “midnight deadline” signs worked to pull folks in. It was great when people in a rush stopped what they were doing to register when they realized that last night was the deadline (or at least caught us on the way out). A few folks came up with voter registration forms already filled out, but which they hadn’t mailed yet, and we were able to give them registration receipts. But the highlight for me was when folks actually identified themselves as available to work as election workers, just to see what being a poll worker would be like. One lady would have to reschedule her current two jobs just to do it. While democracy may be hurting, it’s not dead yet.